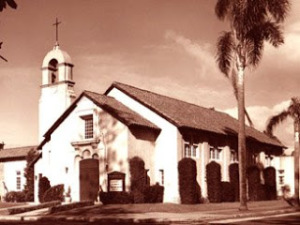 La Jolla’s Congregational Church building is an architectural gem in the Spanish mission style. It was designed by Carleton Winslow, who also designed many of the structures in Balboa Park for the 1915 San Diego World’s Fair.One of the most prominent features of the church’s façade is the simple bell-tower, which contains a genuine bell from California’s Camino Real purchased in the 1950’s with funds from a drive spearheaded by the church’s Sunday School children.It is believed that our building is the oldest public building standing in La Jolla.

Though it has been updated and improved on several occasions, it has carefully maintained the integrity of its design. Among those improvements were the building of a pipe organ in 1926, and the installation of beautiful stained-glass windows in the late 1950’s and early 1960’s. The twelve window panels on the north side of the sanctuary depict scenes from the Hebrew scriptures, while the thirty panels on the south side depict scenes from the life of Jesus.Along with the windows and organ pipes, another striking feature of the interior is the extensive use of California redwood throughout the sanctuary, including the vaulted ceiling and the pews. The rich wood lends the space an air of permanence and depth.In 2005 the church’s central courtyard was rebuilt, a project which included new windows and doors in the Sunday School classrooms and the Forshaw Fellowship Hall.  In January 2012 we celebrated our grand re-opening of the Forshaw Fellowship Hall and kitchen, we remodeled these areas adding beautiful new carpeting, lighting and a commercial kitchen.

Please note that our beautiful facilities are available for rent.