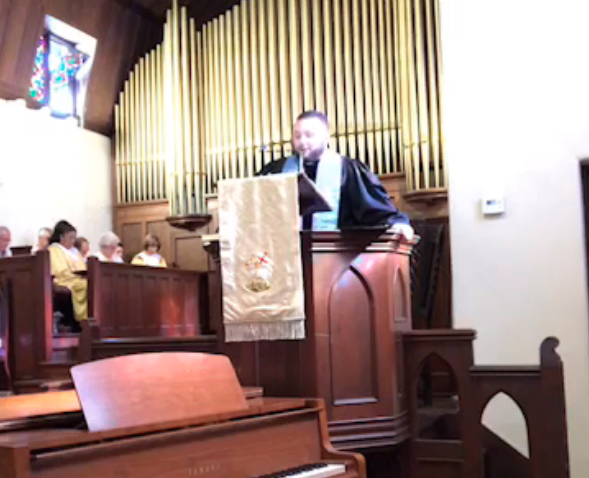 Would you pray with me? Gracious and Holy God, May the words of my mouth and the meditations of all our hearts together be found acceptable in your sight. Our Rock and Our Redeemer. Amen.

The new year is now among us. You’ve had about a week now to get used to writing “19” instead of “18” on forms and checkbooks. You’ve maybe made a few mistakes already, having to scratch out the 18 and correct it with 19. Maybe you’ve had to rewrite a check or two. Every year we go through this period of getting used to the new reality. We have to sort of announce it a few times. We have to say the full date out loud to get used to our new reality. January 6, 2019. January 7, 2019 and so forth as a way of convincing ourselves that we are indeed in the correct year and that we have indeed really made it this far. And after awhile the newness will fade and we will journey through another year awaiting to see what it will bring.

One thing about church is that we don’t operate on a calendar yer, we function on the liturgical year which begins with Advent. The first Sunday of Advent, the day we lit the first purple candle on the wreath that counted down the weeks until Christmas, is the first day of the church new year. We begin the church new year with a season of expectation. And in the Northern Hemisphere it is a season of darkness. We start off the church year waiting in the cold, dark, often lonely space of waiting for the one who brings the light to enter the world. But the story does not end with Christmas. The story continues. It is one of the reasons that while many spent the last week leaning up their Christmas trees and decorations, we in the church keep ours up through next Sunday. The story of the world’s redemption is still ongoing. We have yet to hear the full story. There is still more to come. It isn’t time to clean it all up and put it all away yet.

The season of epiphany corresponds to the beginning of a new calendar year. Epiphany is a perfect time to reflect on the ways that we will change, live, and grow in the new year now that the light of the world is among us. It is such a hopeful way to begin any new journey — knowing that we are not alone. That whatever darkness that might of been doesn’t have to remain into the new year. Epiphany reminds us that that on the days of difficulty in our pasts where we thought there was no way we could make it, no way we could go on, no way to ever heal, to feel better again, that we have been, by the Grace of God carried through it all and have made it to this point in time.

Essentially, what we celebrate during Epiphany is the realization that the baby born in the manger was the long awaited one. We celebrate during this time that the one who was promised, has arrived. And that he isn’t just an ordinary infant. Rather he is the everlasting ruler and the prince of peace.

During the time in which this happened this was such an extraordinary thing. People were desperate. The empire under which they lived was unjust, it was cruel, there was no sense of justice, those who were not wealthy and male had no power and no voice. People were made to think they dint matter. And along comes someone who says that the days of that are over and that every human life is precious beyond measure, that everyone plays a part in the redeeming of the world, that everyone’s struggle and story is sacred. This was a revolutionary message. This was life saving.

The scripture that kicks off this season and this new year is the visit of the magi to Jesus. We read about this on Christmas Eve, we sing about it, we have nativity sets that feature this story predominately but it is on this day that we give this portion of the story its full due. The magi are the first of many characters of come to worship Jesus. But before they make it to the manger we are given a hint of foreshadowing about the hostility Jesus will face, the fear that he strikes in the hearts of those in charge. Even Herod, one of the world’s most powerful men is fearful of this baby born in Bethlehem. He knows, along with the magi, that there is something going on here. He begins his plotting and contriving trying to figure out where this Christ child is.

The story that has been passed town and told and retold has assumed that there were 3 magi to visit Jesus. The eastern orthodox church decided there were 12. The text doesn’t specify. We also have along assumed that the magi were wise men. This is a bit of a misnomer. The magi were likely eastern astrologists and dream interpreters who were regarded as somewhat goofy by the society. People who heard this story back in these times would have found it comical that these goofy dream interpreters were following a star to go worship an infant. People would have thought they had really gone off the ranch. They are wandering around the desert following a star. They are also oblivious to Herod´s ulterior motives and disclose to him information that could put Jesus at risk. So less than wise, they are even, you could say, naive. In this time and place these were not considered “wise men.” They were sort of a side show more than anything else.

And think about it. 2000 years later we are still talking about their choice of gifts for the party. It is an easy target for biblical humor. Comedian Cathy Ladman in her take on this text still cant figure out their choice of gifts. Imagine, a poor, unwed teenage mother has just had a baby in a barn. So when she has her baby shower of course the first thing she needs is… myrrh. Imagine how she had to be polite when they showed up with their gifts. Oh, thank you, one can never have enough… myrrh. What Mary got with the myrrh and frankincense was a make your own perfume kit. Which, goes to show you what the magi were like.

But there is good news in this for us. Mary I am sure accepted them politely. The good news for us is that Matthew included these details to prove to us to show to us that those who Jesus decided to surround himself with were not the elite, but the strange, the naive, the goofy, the misfits, the fishermen who had no education, the shepherds who everyone thought were low class for grazing their camels on other peoples property, the goofy magi, the sinners and the saints. God decided to reveal first to those who were thought foolish, weird, even trashy. He didn’t come first to those who hoard their riches and judge people. He came to those the world had discarded.

So for those of you who have been discarded, set aside, or made to feel like you had to sit in darkness… God came for you. God came for you on your most silly, foolish, or nieve day. God came to bring light, to bring hope, to bring an overwhelming joy to you that you might know that you need not be a ruler or king to count. That your story is sacred and that each new year offers a chance to continue to journey, grow, and fall deeper in love with the one who is the source of all that is.